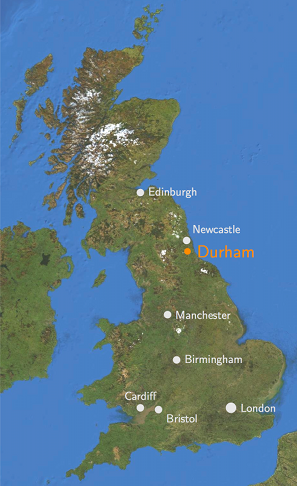 By Air
The nearest airport to Durham is Newcastle (NCL), which is served by direct flights from European cities including London Heathrow, Paris, Amsterdam, Brussels, Dusseldorf, and many others. There are also direct flights to Newcastle from many UK destinations.

By Rail
There are frequent direct trains to Durham from London King’s Cross on the East Coast main line. The journey takes approximately 3 hours. King’s Cross Station is located adjacent to St Pancras International Station, which is easily reached by Eurostar from Paris, Brussels and Lille. King’s Cross can also be reached by public transport from London’s Heathrow and Gatwick Airports. There are also regular trains to Durham from other cities in the UK. East Coast Trains offer links to Scotland; Transpennine Express offers links to Manchester (including Manchester Airport), Sheffield and Leeds; Cross Country links Durham directly with Scotland, the Midlands, and the South West.

The timetable and ticket-booking service offered by National Rail covers trains from all UK operators. Enter Durham (DHM) as your destination station. Tickets can be puchased at stations for immediate travel, but fares are often substantially cheaper if booked in advance, especially if you commit yourself to travel on a particular train—if your travel plans are liable to change, do not book train-specific tickets. There is usually some restriction on which trains cheap tickets are available for.

By Road
Durham city centre is only two miles from the A1(M). Leave the motorway at Junction 62 on the A690 Durham–Sunderland road and follow signs to Durham City Centre.

There are several express coach services daily from most major UK cities. Durham is well served by both regional express services and the local bus network. The city bus station is a short walk from the railway station and runs regular services past the University Science Site.